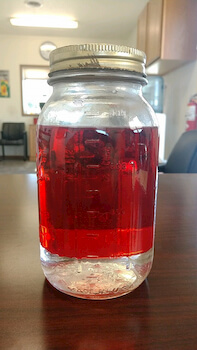 The DOE inventory report has shown a decline for the last seven weeks running...until yesterday.

The inventory numbers this morning was a shocker. The API predicted a negative number for crude, but the numbers today were a positive gain across the board, halting a seven-week slide in the inventory numbers. Not sure which is creating the most negativity, the inventory report or the trade war as the markets are in another heavy downhill spiral today. Last Thursday, after a resolution was not reached in the trade war negotiations, President Trump tweeted that he would be putting a tariff on an additional $300 billion worth of Chinese goods effective September 1st and the energy complex took a nasty tumble. Products were down a little over a dime and crude was off over $4. Friday showed a slight recovery but only .03-,04. This morning (Thursday) there is some positivity in the energy markets but it’s very minor compared to the losses of the last few days. Saudi Arabia commented that they will hold exports at 7mmb/day through September to try and protect prices. I suspect it will take bigger news than that to turn the markets bullish.

In retaliation to Trump's tweet, the Chinese government asked their state purchaser to stop importing some US ag products, and the institution of tariffs on our ag products that are purchased after August 3rd is not out of the realm of possibilities. Also, the US treasury dept casts the title of “currency manipulator” on the Chinese government. After the President's tweet, China did not support its currency be undervalued, which in turn lowers the exchange rate, thereby softening the blow of the 10% additional tariff.

As I stated above, the DOE inventory report has shown a decline for the last seven weeks running, until yesterday. Still, the energy market, even without tweets, has mostly been either bearish or not really sure of a firm direction. Shale oil drillers are reporting dismal 2nd quarter earnings or losses, the number of wells continues to drop more often than not, the wells that are drilled but not finished to completion because of cash flow issues continues to rise and yet the markets continue to flounder. I may be wrong but if I read between the lines, traders and the financial districts of the world are keeping a very close eye on the global economy and the “R” word (recession). This also tells me just how much the trade war between the world’s two largest economies is affecting the world economy just on their own.

One of the biggest headaches you, as a producer, can have is water in your diesel. Here are three of the top problems caused by water in diesel:

How do I keep water out of diesel equipment?

Choose fuel that fights water from the start
One of the simplest ways to protect your operation from water damage is also one of the most overlooked: fuel selection. Even for experienced farmers, it can be easy to fall into thinking that fuel is fuel — but the truth is, all diesels are not created equal. Switching to a high-quality fuel like Cenex Ruby Fieldmaster® premium diesel can go a long way toward protecting your operation from water damage. That’s because Ruby Fieldmaster contains an industry-leading additive package, including powerful demulsifiers that keep water out of equipment. Demulsifiers work by separating water from fuel, and they’re active even while the fuel sits inside your bulk tank. Thanks to these demulsifiers, extracted water sinks to the bottom of the tank and collects safely beneath the fuel — keeping water from ever entering your equipment in the first place.

This is of a quart jar sitting on the shelf in my office. The top 2/3rd’s is our Ruby Field Master. The bottom 1/3rd is water. If you were to shake the jar and mix the two components, the diesel would immediately separate from the water upon setting it down. FM works the same way in your bulk tank. It’s difficult to understand this working in your tank because you can’t physically see it. Feel free to stop in anytime and I will do the “shake test." If you have any other questions on tank maintenance feel free to get ahold of myself, Myron, or Jim.