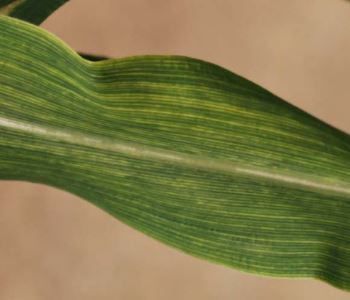 Part two of this series on viral plant diseases will be the Maize chlorotic dwarf virus (MCDV) which affects both dent and sweet corn. Historically, MCDV was most significant in the U.S. during the 1960s and early 1970s especially in the southeastern part of the country, but also creeping into the eastern parts of the Midwest.  Similar to Wheat Streak Mosaic Virus and most other viral plant diseases, MCDV is carried by insect vectors between several species of hosts. In this case, the black-faced leafhopper is the main agent of transmission although several aphid species can also assist.  The somewhat unique factor about this virus is the use of johnsongrass as an alternate host.  Johnsongrass is a perennial grass weed that provide safe harbor to the virus for years.  It is more of a southern weed, but there are confirmed samples collected from North and South Dakota, as well as 45 other U.S. states with the highest concentrations in Texas, Tennessee, and Kansas.

The symptoms of this disease are somewhat variable depending on the genetics of the actual plant.  Most commonly, however, is yellowing of secondary leaf veins which then become swollen.  The rest of the plant will then begin to yellow and the leaves will eventually turn red.  Also, it isn’t called a Dwarf virus for nothing.  As the plant yellows, the upper internodes are shortened causing a severely stunted plant that will not produce an ear.

With all viruses, management is difficult to impossible.  There is genetic resistant to MCDV in some hybrids, however I recommend not using MCDV resistance as a factor in seed selection as it is a fairly rare disease in our area.

The safer bet for control is management of Johnson grass.  Roundup in the tank has probably (and I’m speculating here) reduced incidence of this disease by more than 90%.  Without Johnson grass, the disease has nowhere to overwinter and becomes a non-threat.  That being said, conventional corn acres are on the rise lately so if that is a route you plan on taking, do not underestimate the importance of controlling grass weeds.  As I have outlined here, weeds have the potential to be more damaging than just robbing moisture and nutrients.  They can also serve as hosts for crippling diseases.

Footnote
One interesting note about Johnson grass is that brought to the U.S. from southern Eurasia (similar to alfalfa) in the 1800s as a valuable perennial forage crop.  It now exists in nearly every U.S. state including Hawaii and is considered a major pest.

Our mission is to be our customer's first choice for industry-leading resources and knowledge.